The Cognitive Benefits of Being Bilingual

We are surrounded by language during nearly every waking moment of our lives. We use language to communicate our thoughts and feelings, to connect with others and identify with our culture, and to understand the world around us. And for many people, this rich linguistic environment involves not just one language but two or more. In fact, the majority of the world’s population is bilingual or multilingual. In a survey conducted by the European Commission in 2006, 56 percent of respondents reported being able to speak in a language other than their mother tongue. In many countries that percentage is even higher—for instance, 99 percent of Luxembourgers and 95 percent of Latvians speak more than one language.1 Even in the United States, which is widely considered to be monolingual, one-fifth of those over the age of five reported speaking a language other than English at home in 2007, an increase of 140 percent since 1980.2 Millions of Americans use a language other than English in their everyday lives outside of the home, when they are at work or in the classroom. Europe and the United States are not alone, either. The Associated Press reports that up to 66 percent of the world’s children are raised bilingual.3 Over the past few decades, technological advances have allowed researchers to peer deeper into the brain to investigate how bilingualism interacts with and changes the cognitive and neurological systems.

Research has overwhelmingly shown that when a bilingual person uses one language, the other is active at the same time. When a person hears a word, he or she doesn’t hear the entire word all at once: the sounds arrive in sequential order. Long before the word is finished, the brain’s language system begins to guess what that word might be by activating lots of words that match the signal. If you hear “can,” you will likely activate words like “candy” and “candle” as well, at least during the earlier stages of word recognition. For bilingual people, this activation is not limited to a single language; auditory input activates corresponding words regardless of the language to which they belong.4

Some of the most compelling evidence for language co-activation comes from studying eye movements. We tend to look at things that we are thinking, talking, or hearing about.5 A Russian-English bilingual person asked to “pick up a marker” from a set of objects would look more at a stamp than someone who doesn’t know Russian, because the Russian word for “stamp,” “marka,” sounds like the English word he or she heard, “marker.”4 In cases like this, language co-activation occurs because what the listener hears could map onto words in either language. Furthermore, language co-activation is so automatic that people consider words in both languages even without overt similarity. For example, when Chinese-English bilingual people judge how alike two English words are in meaning, their brain responses are affected by whether or not the Chinese translations of those words are written similarly.6 Even though the task does not require the bilingual people to engage their Chinese, they do so anyway.

Having to deal with this persistent linguistic competition can result in language difficulties. For instance, knowing more than one language can cause speakers to name pictures more slowly7 and can increase tip-of-the-tongue states (where you’re unable to fully conjure a word, but can remember specific details about it, like what letter it starts with).8 As a result, the constant juggling of two languages creates a need to control how much a person accesses a language at any given time. From a communicative standpoint, this is an important skill— understanding a message in one language can be difficult if your other language always interferes. Likewise, if a bilingual person frequently switches between languages when speaking, it can confuse the listener, especially if that listener knows only one of the speaker’s languages.

To maintain the relative balance between two languages, the bilingual brain relies on executive functions, a regulatory system of general cognitive abilities that includes processes such as attention and inhibition. Because both of a bilingual person’s language systems are always active and competing, that person uses these control mechanisms every time she or he speaks or listens. This constant practice strengthens the control mechanisms and changes the associated brain regions.9-12

Bilingual people often perform better on tasks that require conflict management. In the classic Stroop task, people see a word and are asked to name the color of the word’s font. When the color and the word match (i.e., the word “red” printed in red), people correctly name the color more quickly than when the color and the word don’t match (i.e., the word “red” printed in blue). This occurs because the word itself (“red”) and its font color (blue) conflict. The cognitive system must employ additional resources to ignore the irrelevant word and focus on the relevant color. The ability to ignore competing perceptual information and focus on the relevant aspects of the input is called inhibitory control. Bilingual people often perform better than monolingual people at tasks that tap into inhibitory control ability. Bilingual people are also better than monolingual people at switching between two tasks; for example, when bilinguals have to switch from categorizing objects by color (red or green) to categorizing them by shape (circle or triangle), they do so more rapidly than monolingual people,13 reflecting better cognitive control when changing strategies on the fly.

Changes in Neurological Processing and Structure

Studies suggest that bilingual advantages in executive function are not limited to the brain’s language networks.9 Researchers have used brain imaging techniques like functional magnetic resonance imaging (fMRI) to investigate which brain regions are active when bilingual people perform tasks in which they are forced to alternate between their two languages. For instance, when bilingual people have to switch between naming pictures in Spanish and naming them in English, they show increased activation in the dorsolateral prefrontal cortex (DLPFC), a brain region associated with cognitive skills like attention and inhibition.14 Along with the DLPFC, language switching has been found to involve such structures as the anterior cingulate cortex (ACC), bilateral supermarginal gyri, and left inferior frontal gyrus (left-IFG), regions that are also involved in cognitive control.9 The left-IFG in particular, often considered the language production center of the brain, appears to be involved in both linguistic15 and non-linguistic cognitive control.16

The neurological roots of the bilingual advantage extend to subcortical brain areas more traditionally associated with sensory processing. When monolingual and bilingual adolescents listen to simple speech sounds (e.g., the syllable “da”) without any intervening background noise, they show highly similar brain stem responses to the auditory information. When researchers play the same sound to both groups in the presence of background noise, the bilingual listeners’ neural response is considerably larger, reflecting better encoding of the sound’s fundamental frequency,17 a feature of sound closely related to pitch perception. To put it another way, in bilingual people, blood flow (a marker for neuronal activity) is greater in the brain stem in response to the sound. Intriguingly, this boost in sound encoding appears to be related to advantages in auditory attention. The cognitive control required to manage multiple languages appears to have broad effects on neurological function, fine-tuning both cognitive control mechanisms and sensory processes.

Beyond differences in neuronal activation, bilingualism seems to affect the brain’s structure as well. Higher proficiency in a second language, as well as earlier acquisition of that language, correlates with higher gray matter volume in the left inferior parietal cortex.18 Researchers have associated damage to this area with uncontrolled language switching,19 suggesting that it may play an important role in managing the balance between two languages. Likewise, researchers have found white matter volume changes in bilingual children20 and older adults.21 It appears that bilingual experience not only changes the way neurological structures process information, but also may alter the neurological structures themselves. 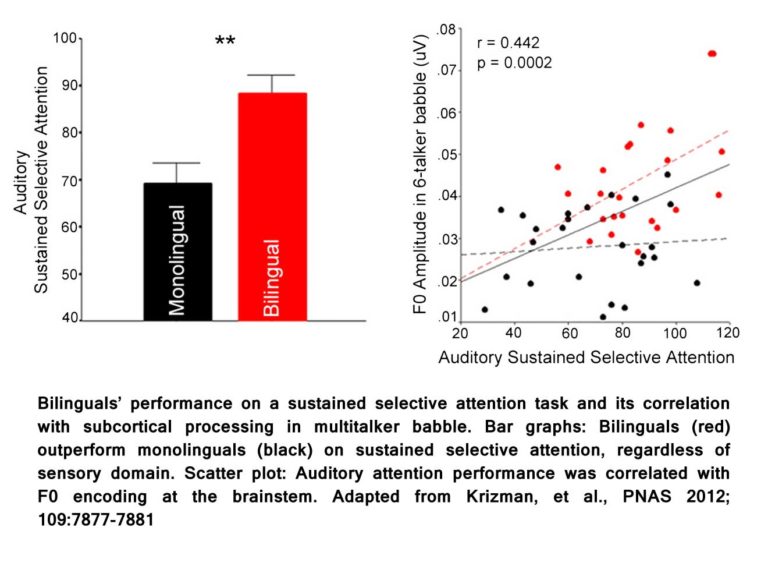 Being bilingual can have tangible practical benefits. The improvements in cognitive and sensory processing driven by bilingual experience may help a bilingual person to better process information in the environment, leading to a clearer signal for learning. This kind of improved attention to detail may help explain why bilingual adults learn a third language better than monolingual adults learn a second language.22 The bilingual language-learning advantage may be rooted in the ability to focus on information about the new language while reducing interference from the languages they already know.23 This ability would allow bilingual people to more easily access newly learned words, leading to larger gains in vocabulary than those experienced by monolingual people who aren’t as skilled at inhibiting competing information.

Furthermore, the benefits associated with bilingual experience seem to start quite early—researchers have shown bilingualism to positively influence attention and conflict management in infants as young as seven months. In one study, researchers taught babies growing up in monolingual or bilingual homes that when they heard a tinkling sound, a puppet appeared on one side of a screen. Halfway through the study, the puppet began appearing on the opposite side of the screen. In order to get a reward, the infants had to adjust the rule they’d learned; only the bilingual babies were able to successfully learn the new rule.24 This suggests that even for very young children, navigating a multilingual environment imparts advantages that transfer beyond language.

The cognitive and neurological benefits of bilingualism also extend into older adulthood. Bilingualism appears to provide a means of fending off a natural decline of cognitive function and maintaining what is called “cognitive reserve.”9, 25 Cognitive reserve refers to the efficient utilization of brain networks to enhance brain function during aging. Bilingual experience may contribute to this reserve by keeping the cognitive mechanisms sharp and helping to recruit alternate brain networks to compensate for those that become damaged during aging. Older bilingual people enjoy improved memory26 and executive control9 relative to older monolingual people, which can lead to real-world health benefits.

The cognitive and neurological benefits of bilingualism extend from early childhood to old age as the brain more efficiently processes information and staves off cognitive decline. What’s more, the attention and aging benefits discussed above aren’t exclusive to people who were raised bilingual; they are also seen in people who learn a second language later in life.25, 28 The enriched cognitive control that comes along with bilingual experience represents just one of the advantages that bilingual people enjoy. Despite certain linguistic limitations that have been observed in bilinguals (e.g., increased naming difficulty7), bilingualism has been associated with improved metalinguistic awareness (the ability to recognize language as a system that can be manipulated and explored), as well as with better memory, visual-spatial skills, and even creativity.29 Furthermore, beyond these cognitive and neurological advantages, there are also valuable social benefits that come from being bilingual, among them the ability to explore a culture through its native tongue or talk to someone with whom you might otherwise never be able to communicate. The cognitive, neural, and social advantages observed in bilingual people highlight the need to consider how bilingualism shapes the activity and the architecture of the brain, and ultimately how language is represented in the human mind, especially since the majority of speakers in the world experience life through more than one language.

how old is your child?